This week, we are glad to have Aaron Tang to allow us to republish one of his top articles about fitness and commitment.

Aaron is the founder of mr-stingy.com. He writes about optimizing time, money and relationships — to make the most out of life. In his day job, he helps young people become better versions of themselves.

Let us read the story of James who used to call himself “Kung Fu Panda”.

I have a fat friend.

He’s always seemed comfortable with it. He calls himself “Kung Fu Panda”, and doesn’t get angry when people call him variations of “Fatty”.

But late last year, he decided to change. And start a life-changing weight loss adventure. He started at 122 kg on the 1st of October 2014. Six months later, he tipped the scales at 96 kg.

I’ve known James for more than four years now. The first time we met, I immediately noticed two things: he was fat, and he loved to eat. He loved food, and by the looks of it, food loved him too.

We were members of a Rotaract club — so we hung out in a group often. Whenever he was around, food was involved. It wasn’t salads and cereal either. It was usually fried, fatty, oily food. The type that your typical Malaysian loves.

James hadn’t always been fat though. When he was younger, he was slim. He only started putting on weight in high school. And then he got consistently fatter over the years. James seldom kept track of how much he weighed, but he knew he was expanding – because his clothes kept getting tight. But except for one attempt where he managed to lose 10kg (only to gain it all back), he embraced being big. And kept buying new clothes every time he couldn’t fit the old ones.

Things culminated late last year, when James fattened up to his biggest size ever. Even close friends started commenting about how much weight he had put on.

“EVERY KG YOU LOSE — I’LL DONATE TEN BUCKS TO CHARITY”

It started innocently enough. One random workday, a bunch of guys in a Whatsapp chat group talking trash:

“Yeah, right…” a skeptic threw back.

“I’ll tell you what… Six months. Every kg you lose, I’ll give ten bucks to charity.”

“I’ll do it too. Ten ringgit for every one kg,” I chipped in.

Then another friend pledged. And another. By the end of that conversation, we had assembled a group of willing pledgers. We were going to literally pay for his weight loss.

James set his target at 10 kg.

“But wait, you’ve got all of us risking our money James. What if you fail your target? What’s yourpunishment?” the crowd asked.

“For every kg I miss my target, I will donate one hundred ringgit.”

Sometimes the male ego is useful.

One of our Rotaract members always dreams big. Let’s call him PP. PP saw potential in what had just happened in our Whatsapp group.

So he proposed to expand the project: make it public, and have our Rotaract club organize it. It was approved. The club set up a campaign called #10for1KG — asking people to pledge to lose weight — and other people to give money to charity based on the weight loss. Anyone could sign up. The club would just track progress and keep people accountable.

The campaign was a huge success – 24 people pledged to lose weight, and many others to donate money. We let donors choose the charity they wanted to help. As long as it was for a legit charitable cause.

James was the star of the campaign. His pledges officially came up to RM 396 per kg. If he lost his target of 10 kg, he would raise almost four thousand for charity.

But of course the male egos kicked in again. It wasn’t enough to just raise money for charity.

PP had to up the stakes: “10 kg is nothing. Lose 25 kg and I’ll walk down Changkat Bukit Bintang in a Pink Panther costume.”

“Then you walk down Changkat Bukit Bintang in a Barney (the purple dinosaur) suit.” 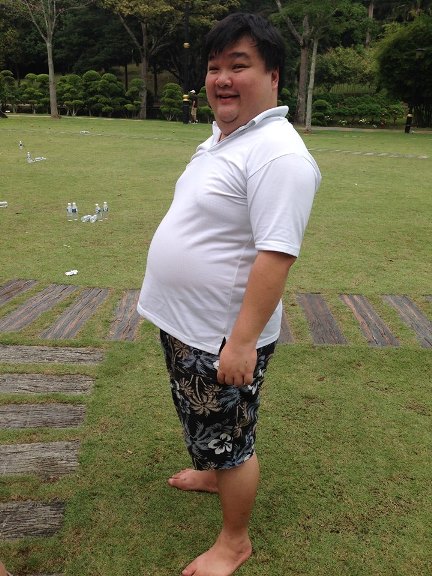 To design his weight-loss program, James turned to a trusted friend, who freelances in fitness training.

It was a program based on Leangains, Jen Reviews, Intermittent Fasting, and Carbohydrate Cycling. The following is what James did: 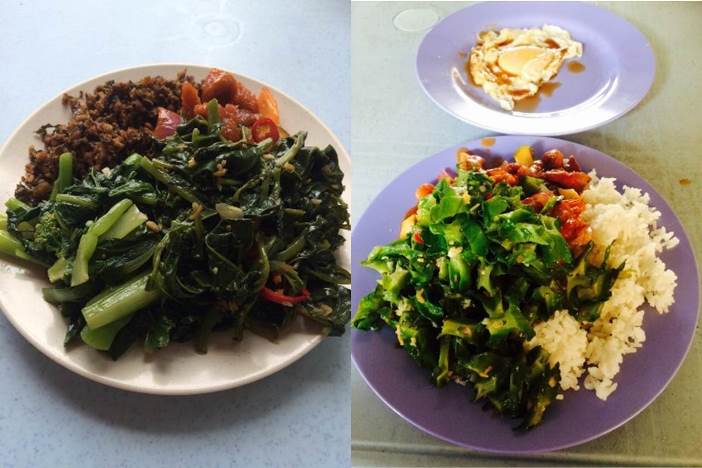 Initially, James experimented with portions – starting with very small meals. But eventually, he found that he could still lose weight while eating as much as he liked – as long as he followed the principles above.

It’s the best thing about this diet, according to James:

“You can eat a lot of things and you don’t need to starve. When I’m not fasting, I can eat as much as normal… Even more than normal… And still, lose weight.”

(On a side note, I do a version of the above diet too. And it’s helped me drop from 21% body fat to about 15% over the past six months. All while I was still increasing my weights in the gym.)

One important thing: James doesn’t have time to cook. So he ate out most of the time. In an ideal world, we would all prepare healthy home-cooked meals. But James has shown that you can still eat out, as long as you make healthy food choices.

“I was so proud of myself the first time I ate meat without the fat. Wow, did James Ong really do that!?”

“IN MY FIRST WEEK OF WORKING OUT, I NEARLY DIED”

The above section may have made it sound easy. But James worked hard at exercise too. Extremelyhard.

This is his exercise routine:

Squat: The king of exercises

Deadlift: 5 reps are all you need

Bench Press: Popular, but not overrated. May attract attention from women.

If you’ve read about powerlifting before, you’ll recognize the above routine borrows very heavily from Starting Strength and StrongLifts 5×5. Both James and I are strong believers in these programs. They give you amazing results for very little time spent.

When he had time, James also sometimes swam for 30 minutes on non-gym days. But the core of his exercise program was barbell weight training.

“But wait – don’t you need lots of cardio exercise to lose weight? Lots of running, because weight training just makes you bulky right?”

I don’t think so. I believe the most efficient way to lose weight healthily is to modify your diet and lift heavy weights2. Cardio can just supplement that.

“WHEN IT FIRST STARTED, IT WAS JUST A STUPID BET…”

And yet, the amazing happened:

THE FINAL MONTH: LESSONS ON SUSTAINABILITY

By 1st March 2015, James had vastly outperformed his initial goal of 10 kg. He was now just chasing the 25 kg target set by our friend PP.

A target that would have made the difference between the streets of Kuala Lumpur seeing Barney and the Pink Panther.

He needed to lose another 4 kg in four weeks. But of all the months of James’ weight-loss journey, this was the most difficult. For some reason, his weight plateaued. It wasn’t going down at all.

James went into panic mode: Except for four cheat days, he totally eliminated carbohydrates (even on gym days), and ate super clean food (i.e. steamed fish and vegetables every day). He forced himself to swim every non-gym day, instead of doing it happily in his free time. It was stressful, and he was constantly tired from having no carbs.

Could you eat this every day for a month?

Eventually he lost 5 kg, bringing his grand total to 26 kg in 6 months.

But he had been miserable:

“The first five months were pretty easy. But the last month wasn’t! It was depressing…”

If there’s something we can all learn from the final month it’s this: No matter what self-improvement plan you’re pursuing, it’s OK to work hard. But if you’re making yourself extremely miserable – understand that you’ve gone too far. Progress should be consistent and pleasant – not drastic and depressing. Because this kind of progress is unsustainable.

You might get to a target fast – but you’ll be unhappy and slide back to your old ways. It’s OK to be gentle with yourself. It’s more sustainable that way.

Along with the huge weight loss, James also achieved the following:

HOW MUCH TIME & MONEY?

This is how much James had to spend over the past six months:

Not too expensive or time-consuming right?

But even better, due to his modified diet, James now spends about RM 200 per month less on food. More than enough to cover all his gym expenses.

Not only is he getting fitter, he’s getting richer too. 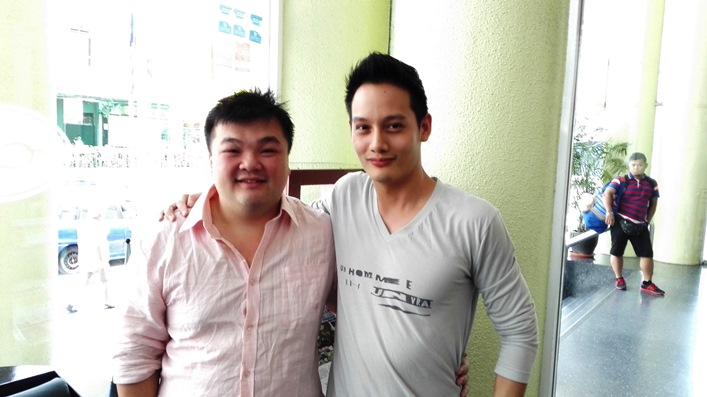 James continues to follow his diet and workout routine (the sustainable version). He intends to lose another 20 kg. I believe he will. By the end of 2015, we will probably weigh the same.

On the night of 11th April 2015, the Pink Panther walked through one of the busiest nightlife areas in Kuala Lumpur, flanked by half a dozen ladies. James had made good on his promise, and so had he.

Pledgers started banking in their donations. The full collection will total about RM 10,000. 78% of that money has already been collected and sent to help the earthquake survivors in Nepal. When the remainder is collected, it will help fund a school in Malaysia.

James isn’t one to brag, but when I interviewed him for this story, I could see the happiness in his eyes, and feel the passion in his voice. I asked him the all-important question:

“Why did you suddenly decide to do it?”

“…Because I thought to myself. If I got married, would I have enough health and energy to take care of my family? I was already starting to have small health problems and my gout was worsening…”

Ever the gentleman, James credits his friends and family for helping him reach his goal. I’m proud to be one of them:

“Everyone was very supportive: my mom and dad, my friends, and especially my trainer. It’s been inspiring. I told myself: I’m not gonna disappoint any one of them.”

But perhaps the best show of support came from an unlikely source. I’ll let James tell this one:

“I used to regularly go to this burger seller near my home. Over the years we became friends. But when he heard about my weight-loss program, even he started encouraging me.

One night, I decided to cheat, so I stopped by his stall and ordered some Oblong Ramlee Burger.

He looked at me for a moment, and then gave the best reply I could have possibly asked for…”

FOOTNOTES:
1. EXCHANGE RATE: 1 USD = 3.5 RM
2. IF YOU’RE INTERESTED TO BUILD MUSCLE AND GAIN WEIGHT, YOU CAN USE THE SAME EXERCISE ROUTINE TOO. JUST MAKE SURE YOU EAT ALOT MORE.
3. FOR ANOTHER GREAT STORY ABOUT A GUY NAMED JAMES WHO DOES INTERMITTENT FASTING, CLICK HERE.
4. PIC AT PEXELS

Thanks to the courtersy of Aaron Tang a.k.a. Mr. Stingy, we are republishing his that was originally published at Mr. Sting (Lost 26kg and a 10K Charity). Check out more from Mr. Stingy (or Aaron Tang) at http://www.mr-stingy.com/

Leave your comments below on your fitness goals. It’s March and you have 3/4 of Year 2016 left to make it happen! If James can do it in 6 months, you have NO EXCUSES that you can’t.

For your convenience, we have shared a great MOTIVATIONAL VIDEO to get you started ~!!!

Share us your fitness progress on the comments box below 😀

Start and Commit to a Diet Plan Now Before It̵...
Top 25 Powerful Quotes That Will Motivate You to S...
Motivational Speakers for Corporate Events: Why Yo...
Donate to Help A Local Refugee School to Stay Open...