How This Young Malaysian Hack the Media to Grow Iprice Group Biz Exponentially ?!!

Want to save thousands of dollars by doing your own PR and marketing?

It wasn’t that impossible to Andrew Prasatya, a Senior Content Marketer at Iprice group.

According to Prasatya, he has a proven public relations (PR) system that had helped his company to get over 200 pieces of press coverage in Southeast Asia’s top-tier media… FOR FREE!

In this piece, Prasatya shares five strategies you can use to get press coverage for your company.

1. Listing The Top Media Outlets In Your Region

Afterward, they set internal targets for the number of media articles they would secure in those outlets each quarter.

2. Building A Relationship With The Right Journalist

After compiling the top media list in their market, the team identified who would be the best journalist or editor to contact.

Prasatya explains: “We spend our time and energy getting in touch with the right person at each media outlet. Since we’re an e-commerce company, we look for writers who cover start-ups, e-commerce, and technology.”

Prasatya explains how his team builds solid  relationships with media:

Prasatya sums it up perfectly: “A good relationship with the media is sustainable and mutually beneficial;  not a purely transactional one.”

The Iprice Group Content Marketing Team then focused on creating insightful and newsworthy content. “We will never only talk about how good we are, what service we offer and other boring things,” says Prasatya. (To which I say, on behalf of journalists everywhere “thank you!”)

Prasatya shares examples of some of his team’s content that were featured in more than 15 top news outlets across Southeast Asia and garnered over 5,000 social shares each including:

The team conducts research on what’s gaining traction in Southeast Asia and around the world. To do so, they use online tools such as Google Trends, event calendars, local news websites and good ol’ fashioned talking to people.

Next, the team tries to create a unique story to capitalize on the momentum of a specific event. For example, when the team saw a lot of media publishing “boring” news about the iPhone 7 including the evolution of the iPhone and the technology inside the iPhone, they decided to rank countries based on the price of iPhone 7 in that country.

They also compared how much people need to work in each country to afford the iPhone 7. (Now that’s a story that anyone would be interested to read.)

Finally, the team repackaged the article into different forms of content including an infographic, interactive content and video.

After the content is ready, the team presents their media pitch. Here’s an example of a personalized pitch that landed them coverage in Tech In Asia. 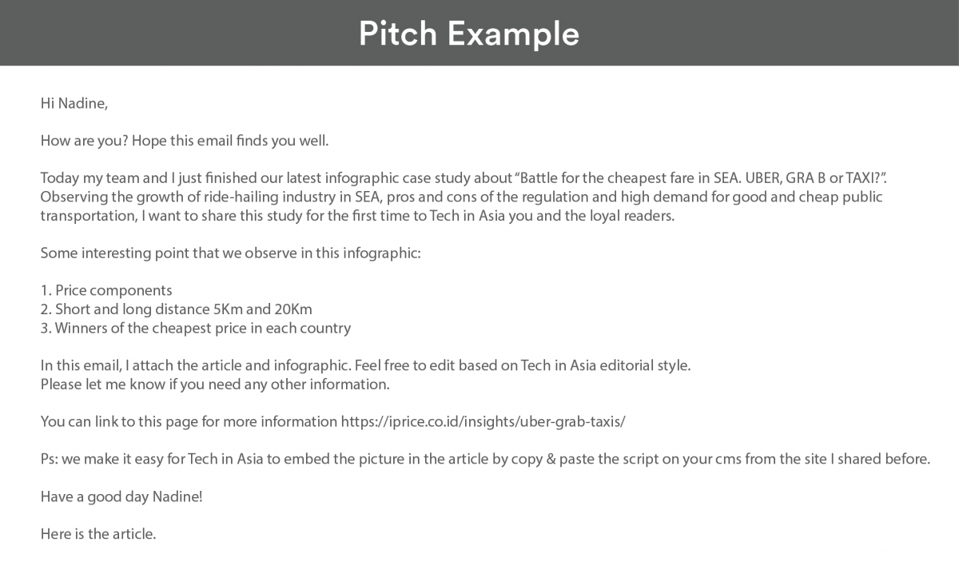 Before sending their pitch, the team gets in touch with the right person at the media, depending on the type of story.

Prasatya says: “We always do A/B testing with our approach to the media to see which approach is better. For example, we try many different formats and track the response rate and conversion or publication rates. Then we will use the one with the highest response and conversion rates.”

5. Sharing The Love On Social

Whenever a journalist publishes one of their articles, the Iprice Group team always thanks them on social media, as well as tag their personal and company social media accounts.

The team then compared 800,000 visits of their Indonesia and Malaysia websites, from two weeks before Ramadan and in the first two weeks of Ramadan.

They found out that people are using their Suhur time (eating early in the morning) to shop online. In fact, they witnessed a whopping 400% JUMP in online shopping during the Ramadan period.

They also found that during lunch time, people use their lunch break to shop online – a 60% jump during the Ramadan period.

In Indonesia, the team pitched the story to the media which got picked up by 15 top-tier media outlets including CNN, as well as received 10 quality backlinks.

Besides Forbes.com, in Malaysia, this story was featured in two popular local newspapers, online radio and in a TV interview.

As shown by the team at Iprice Group, it’s possible to successfully do your own PR if you follow these five key steps.

This article is written by Joe Escobedo. The original article can be found here.

Share this article with your friends and leave your comments below!!!