Six developing nations, including Malaysia and South Africa, deserve to follow Brazil into junk status, if credit-default-swaps traders are to be believed.

Two weeks after the Latin American country’s credit rating was lowered, CDS investors are punishing other emerging markets facing similar challenges, sending their implied sovereign ratings at least five levels below their official grades, according to data from Moody’s Corp.

Malaysia is A3 at the company, though traders see it six levels lower at Ba3. South Africa, which is a Baa2, is viewed as a B1 borrower. Three Aa3 nations, including China, are perceived by the markets as deserving the lowest investment grade.

Most developing nations are confronting the same issues that saw Brazil losing its investment-grade rating at Standard & Poor’s – a plunge in commodity prices, a slumping currency and political turmoil.

Sputtering growth in China and the prospect of higher US interest rates are also boosting concern of more downgrades across emerging markets. Having been censured for laxity during previous market meltdowns, the ratings providers won’t want to be caught failing to act this time round, Per Hammarlund of SEB AB said.

“The deterioration in commodity-dependent economies’ credit-risk metrics can lead to more downgrades in emerging markets in the next three to six months, if not earlier,” said Hammarlund, the chief emerging-markets strategist at SEB in Stockholm.

“The rating agencies were roundly criticised for being slow to react during the 2008 crisis as well as the 2011 eurozone crisis. They are going to be much more trigger happy this time.”

While investors don’t always agree with official grades, the gaps for these nine countries are some of the biggest among the 65 borrowers tracked by Moody’s implied-ratings model, which is based on CDS prices as of September 21 compared with peers in the same ratings category.

While the investors’ ever-changing opinions are not an input into the ratings decisions, the company’s analysts study them to understand why the gaps exist, according to Moody’s. 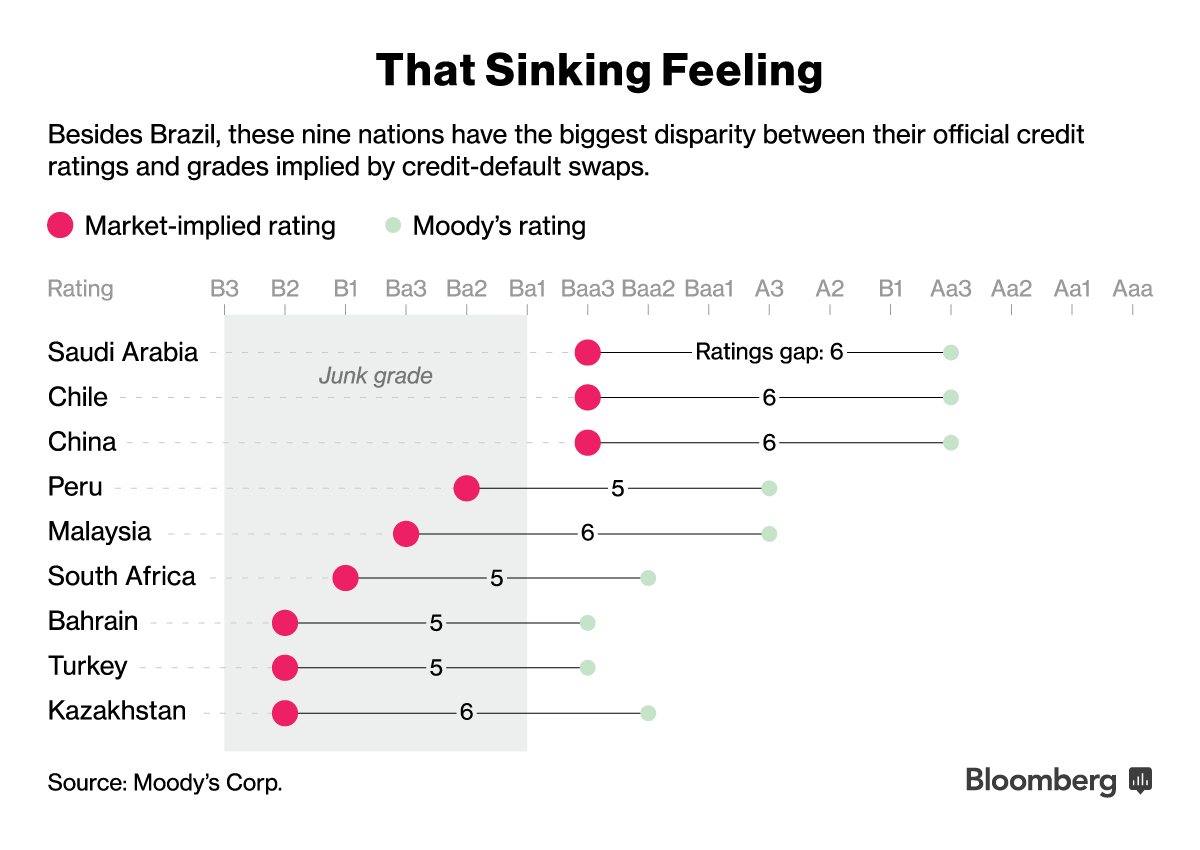 Finance-Ministry officials in Chile and Malaysia didn’t respond to requests for remarks. A National Treasury spokeswoman in South Africa declined to comment.

Political disputes are a key hindrance to investors’ perception of emerging-market creditworthiness. Protesters in Malaysia are calling for Prime Minister Datuk Seri Najib Razak’s resignation over a funding scandal and Turkish politicians are preparing for premature elections after failing to form a coalition government.

Depressed oil prices have hurt producers. Saudi Arabia is heading for the biggest budget deficit in almost three decades, while the shortfall in Bahrain is forecast to double this year from 2014. The risk of a default by Kazakhstan within 12 months is at a historical high, according to Bloomberg’s sovereign-risk model.

Even as investor pessimism pervades these nine nations, Brazil, too, may be at risk of more downgrades as confidence wanes in President Dilma Rousseff’s economic policies.

The country, which still has investment grades at Moody’s and Fitch Ratings, saw its implied ratings trade six steps below the official level.