This post is republished from The Economics Asia Print Edition named “No More Mr. Nice Guy“.

Beset by scandal, Malaysia’s prime minister cracks down on dissent 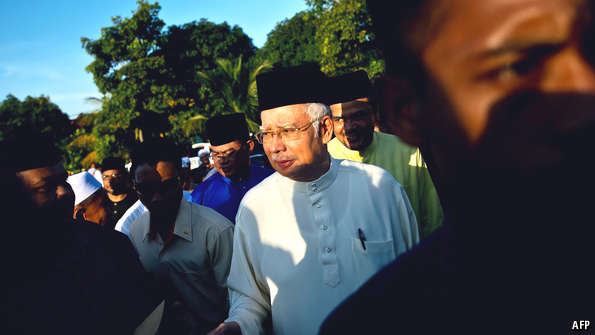 DOWN a quiet lane in Kuala Lumpur, Malaysia’s capital, campaigners at trestle tables are doing a roaring trade in yellow T-shirts. The volunteers have already flogged more than 30,000 of the garments, which are becoming de rigueur for Malaysians planning to attend protests on August 29th-30th to demand the resignation of the country’s prime minister, Najib Razak (above). The protests are being organised by Bersih (meaning “clean” in Malay), a loose union of non-government groups calling for electoral reform. In 2012 police dispersed thousands of Bersih protesters with tear gas and water cannons and arrested about 500. This weekend’s rally in Kuala Lumpur, which authorities say is illegal, could yet go the same way. Maria Chin Abdullah of Bersih hopes that at least 200,000 Malaysians will protest in three cities. Malaysia’s political system, she says, “has really become quite rotten”.

The planned protests are the latest turn in a wild saga which has gathered pace since early July, when the Wall Street Journal reported that nearly $700m had found its way into bank accounts owned by Mr Najib shortly before a close-fought general election in 2013. Much has been made of the suggestion that the money is somehow linked to 1MDB, a state investment firm struggling to service debts of around $11 billion. Its dealings are now the subject of an investigation in Switzerland, through which some of its cash may have passed.

Mr Najib vigorously denies the suggestion and says he has never used public money for personal gain. Rather, senior members of his party, the United Malays National Organisation (UMNO), assert that the prime minister received a legal political donation from a wealthy but as yet unnamed Arab family which approves of UMNO rule. On August 22nd local media reported one party chief as saying that UMNO had hoped the cash would help it reverse gains being made by a popular ethnic-Chinese opposition party, which he claimed was backed by clandestine Jews.

The prime minister’s opponents say he is dodging a proper investigation. In July he sacked his deputy, who had begun to question his handling of the affair, and promoted to the cabinet several members of a committee which had been arranging hearings into alleged mismanagement at 1MDB. In short order the attorney-general was replaced (supposedly on health grounds), a pesky police chief was retired and several members of the country’s anti-corruption commission pushed aside.

The media is under the cosh too. A government agency has suspended the printing licences of two troublesome newspapers, while ministers say they are mulling new rules to curb speculation on social media. In August police issued an arrest warrant for Clare Rewcastle Brown, a British investigative journalist living in London (and sister-in-law of Gordon Brown, a former British prime minister); her blog, the Sarawak Report, has closely covered the affair. The charge against her, of participating in “activity detrimental to parliamentary democracy”, reflects the government’s contention that its critics are part of a sinister conspiracy.

The crackdown has underscored the weakness of Malaysia’s institutions and displayed a new ruthlessness in Mr Najib. An urbane, British-educated scion of a political family, he seems to have abandoned earlier efforts to paint himself as a reformer. But he is digging in. Meanwhile the state of the economy, which Mr Najib had claimed to be carefully tending, grows more parlous. The country is running down foreign-currency reserves to prop up the ringgit, down by more than 16% this year. A slowing China and falling prices for commodities triggered the currency slide, but the political drama has accelerated it.

Mr Najib’s resilience says much about the dominance of his party, which has led Malaysia’s ruling coalitions for six decades. UMNO is easily the most popular party among ethnic-Malay Muslims, who make up more than half of the population and who trust the party to defend racial laws that give them a leg up over their ethnic-Chinese and ethnic-Indian compatriots. Gerrymandered electoral districts, compliant courts and the use of colonial-era sedition laws have helped it to shore up its power—even when, as in the last election, the opposition won most of the votes but a minority of seats in parliament.

The main risk of being turfed from office comes from within the party. It is why UMNO bigwigs have long fostered deep lines of patronage that make them hard to budge. The party hierarchy has tended to reward loyalty over ability and to punish upstarts. Even a torrent of criticism from UMNO’s senior statesman, Mahathir Mohamad, who saw off several challengers himself while prime minister from 1981 to 2003, has failed to unbalance Mr Najib.

In private many MPs from his party express little enthusiasm for the prime minister. But nor do they spy challengers whom they would risk their careers to support. The recent sackings have been a bracing reminder of what happens to critics. Some in UMNO have grown guarded about what they write in e-mails or say on the phone. It is lost on no one that Mr Najib’s new deputy prime minister is also the country’s home minister, responsible for its police. The fate of Anwar Ibrahim—a former UMNO star who went across to the opposition and who is in jail, for the second time, on an iffy sodomy charge—is a reminder that demotion is not the worst punishment Malaysian politics can impose.

At some point Mr Najib’s plunging popularity may be perceived to imperil an UMNO victory at the next general election. At that point the cleanest way for party dissidents to defenestrate the prime minister would be at UMNO polls for the party leadership. Yet these have been postponed by 18 months, perhaps to see off just such a threat. A more imminent challenge is a vote of no confidence which opposition politicians plan to force through when Parliament reconvenes in October. The hope is that enough parliamentarians from the UMNO-led ruling coalition will back the idea of a technocratic government, drawn from both sides, which would hold power until the general election, due in 2018. One possible candidate for prime minister is Razaleigh Hamzah, an elder statesman popular among business leaders.

This scheme remains unlikely, but it could get a boost if many tens of thousands of Malaysians take to the streets on August 29th. Yet it is also possible that the protest could end up rallying ethnic-Malay support for Mr Najib. Recent rifts in the multi-ethnic opposition have led to worries that many ethnic-Malay supporters of the opposition and of previous Bersih rallies may not turn out this time. The risk is that a big rally dominated by ethnic Chinese and Indians would inflame the pernicious sore, scratched on UMNO’s fringes, that the country’s Islamic heritage is under threat from non-Malays. That is a fiendish trap.