(CNN) Newly-discovered satellite photos may have given scientists a fresh clue as to the location of Malaysian Airlines 370, one of the world’s most famous aviation mysteries.

The four satellite photos, shot less than a month after MH370 disappeared in 2014, show 70 objects drifting on the ocean in the vicinity of the predicted crash zone, the Australian Transport Safety Bureau (ATSB) said Wednesday.
“(Geoscience Australia) analysis classified 12 objects as ‘probably man-made’ … but cannot determine whether they are aircraft debris,” the report said.
The photos were taken by the French military over the Indian Ocean on 23rd March 2014, just over two weeks after the plane vanished.
The ATSB, which received the images in March this year, said the satellite images were re-analyzed as “part of a systemic process of review that commenced in 2016.”
“The ATSB had to negotiate the release of the native resolution imagery from the French Ministry of Defense,” a spokesman told CNN.

The images were shot in an area to the west of the original search zone, where scientists said in December MH370 might be located.
David Griffin, a physical oceanographer at Australia’s Commonwealth Scientific and Industrial Research Organization (CSIRO) who helped analyze the pictures, said the photos could help pinpoint MH370’s location to an “unprecedented” degree — if they’re actually showing plane debris.
“It hangs on the impossible thing to know which is whether these were actual pieces of the plane,” he told CNN. 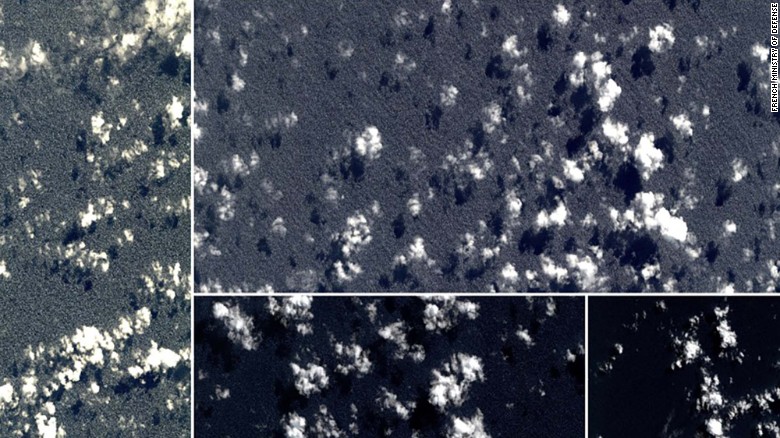 Four satellite photos taken shortly after MH370 vanished in March 2014.
In a statement released along with the new photos, ATSB chief commissioner Greg Hood said they should be treated with caution.
“The image resolution is not high enough to be certain whether the objects originated from MH370 or are other objects that might be found floating in oceans around the world,” he said.

Malaysian Airline 370 departed from Kuala Lumpur in the early morning of March 8th, heading towards Beijing on a routine journey.
Within hours it had stopped communicating, then vanished from radar after it made an unexpected turn to the west.
There were 227 passengers and 12 crew on board when it disappeared. 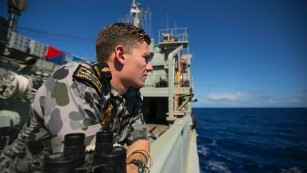 Search for flight MH370 suspended 02:43
It has never been confirmed what happened to the aircraft after that, although the search for the plane has centered on the seas off the western coast of Australia.
Debris confirmed to be from the missing aircraft has washed up along the eastern coast of Africa on multiple occasions in the past two years.
In addition, analysis of the last satellite readings from the missing plane showed it was spiraling fast towards the sea when it stopped transmitting.
Australian, Malaysian and Chinese governments called off the search for MH370 in January 2017.
Despite that, relatives of the missing passengers, who were mainly Chinese, have refused to give up on the missing airliner and have said they are planning to continue the search through a private company.

The four images were provided to Australian authorities by the French military for analysis on 2 March, three years after they were taken.
They were captured by France’s Airbus PLEIADES satellite in an area which was not covered as part of the initial underwater search, according to the ATSB.
It is, however, in a location where scientists said earlier this year the missing plane could be found.
In their new analysis released in December 2016, Australian scientists including Griffin suggested a new search area between 33 and 36 degree latitude.
According to Griffin, the new information would indicate the plane could be located at 35.6 degrees latitude, 92.8 degrees longitude, consistent with their previous suggested area.
“We’ve already chosen an area where we think the plane was likely to have crashed, the proposed new search area” Griffin told CNN.
“So let’s make a prediction, if you’re right, and that’s where the plane crashed, if we had a close look at the ocean … and saw no strange images we’d think ‘Oh gee we’re wrong’ (but) indeed we looked at the images and saw all these strange objects,”said Griffin.
“It’s not conclusive but it’s the best you could hope for.”
The official search effort would be continued if “credible” new evidence was found, Australia’s transport minister Darren Chester said in January.
Here’s a video about the discoveries that we found during the search for MH370.

This news article is originally reported by CNN. We are sharing here only for educational and informational purpose for our audience. You can find the original article here.