The Not So Glamorous Stories of 5 Malaysian Geniuses

Home » Articles » The Not So Glamorous Stories of 5 Malaysian Geniuses

We remember how when we first learned about Wawasan 2020 in school, we imagined there would be flying cars, buildings on clouds, and using those long long vacuum tubes as public transport.

Realizing that it’s already 2017 now, we would probably have to wait a couple more decades before that can become reality. Before we can actually get to the fancy future technology, being a developed country also means that we need a large population of professionals like engineers, academicians, doctors, and other highly skilled intellectuals. And if the stars align, producing the occasional pioneer like Albert Einstein or Elon Musk would help a lot as well.

If you recall, we have news about Malaysian child prodigies popping up from time to time. But don’t know it’s because we suck at taking care of them or what, some of our made-in-Malaysia prodigies end up in very questionable situations. Here are 5 prodigies that we hope would have a better future.

1. The 13 year old Oxford student that once ended up in prostitution Sufiah Yusof (middle) with her sister and father. Image from ibnismail.wordpress.com

Born to a Malaysian mother and a Pakistani father, Sufiah Yusof became famous in 1997 when she was accepted into Oxford at the tender age of 13.

Everyone was of course intrigued by her achievement and wanted to know her secrets, like how she studied and how many hours she slept, but they got more than they bargained for.

When Sufiah was 15, she dropped out from school and ran away, and she refused to even see her parents.

What followed was a reveal of her father’s abusive parenting, which her older brother also suffered.

Eventually, she returned to Oxford to continue her studies but failed to graduate because she missed the exams due to an illness. She did, however, get married instead.

Sadly, even that was short lived because they divorced after 2 years.

She then turned her focus to studying economics, and it was after that when news about her working as a prostitute/ escort broke out, working at a rate of 130£ per hour.

She did eventually get out of that and went into social work. In a 2015 interview with NONA, Sufiah revealed that while she used to be hounded by the media constantly because of the prostitute thing, she is now a fairly normal 30-year-old woman. For more recent updates of her, you can just check out Sufiah’s blog here. Photo from her blog inquiringfeminist.com

2. The boy with a PhD in particle physics

At the age of 12, Chiang Ti Ming was the youngest person ever to be accepted into California Institute of Technology (CalTech), one of the oldest and most prestigious universities in the US.

But his achievements didn’t stop there. While in CalTech, he became the youngest student ever to win the “Undergraduate Students Merit Award” two years in a row.

After that, he went on to graduate with a doctorate in particle physics, when 95% of this office can’t even MAT-MATIK quick enough to save their own life. Particle physics is a super power, right?  Image from marvel.com

Behind the glorious achievements and awards, the boy was silently suffering from depression.

It was reported in 2002 that he was admitted to the hospital for “depression and withdrawal symptoms“.

Not much is known about his condition and circumstance, almost nothing was revealed to the public even after he tragically passed away. We couldn’t even find more than 1 photo of him. Image from thestar.com.my

In case you didn’t know, people with higher intelligence tend to be more susceptible to anxiety and depression, a bunch of other mental illnesses, and also unhealthy habits.

So that friend we have that’s always sappy and like to drink and/or smoke?

They could just be too smart for their own good.

3. The 3-year-old reading genius that no one remembered Remember what you were doing at the age of 3?

While most 3-year-olds have only just figured out walking, drawing circles, and constructing proper sentences, Shukri Haddafi took Malaysia by storm as he could already reading the newspapers fluently.

Among the Malaysians that took interest in young Shukri were Tan Sri Jins Shamsuddin, who casted him in “Menanti Hari Esok” along other famous actors/ actresses back in the day.

Another was Profesor Diraja Ungku Abdul Aziz (otherwise known as Zeti Akhtar Aziz’s dad) who took Shukri under his wing and offered to pay for all his education fees.

Where is Shukri now?

Well, it looks like he just vanished because there was barely anything we could dig up about him.

All there was were rumors about him selling roti canai, becoming a coconut vendor, and even ending up as a drug addict. Now the roti canai theory seems like a relief. Image from yelp.com

4. The MAT-MATIK “wizard” that liked children a little too much

Nur Fitri Azmeer Nordin is a math genius studying under the sponsorship of MARA in Imperial College London, another world famous school.

About two years ago, all his achievements could not save him when he was sentenced to 5 years in prison for the possession of a lot child pornographic material. 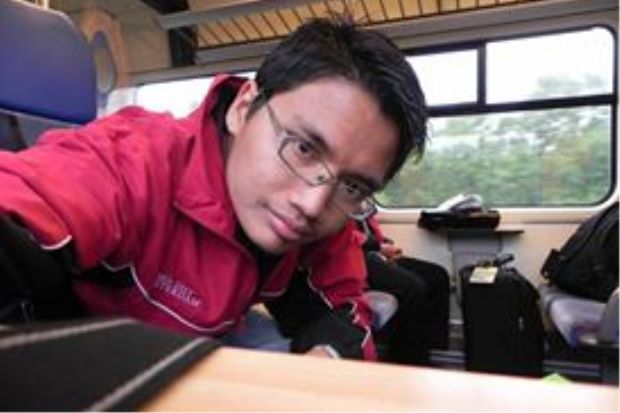 Amidst the outrage of the incident, there were calls for him to be given a second chance, which was understandably met with objections, and disputed by the credibility of his genius-ness.

He participated in the International Mathematical Olympiad in 2011, and although his results were good, he was far from being the best. The last that we heard, his sentence was reduced to 9 months, and he was deported back to Malaysia with lots of hush-hush.

He will most probably be given the opportunity to continue his studies locally, but other than that, we don’t where he is, or whether he is under going surveillance or counseling.

ChiliSos.my had covered his story in greater detail before, and you can read it here.

5. The genius who was awarded ZERO university degrees

Other than his MAT-MATIK mastery, he also has an awesome short term memory, which he demonstrated when he memorized and recited a 32 digit number almost instantly.

Meanwhile, most of us also can’t remember the Wi-Fi password for our office.

He also wrote 235 MAT-MATIK formulas and 12 of them were published in his book, which by the way is one of the reference books used by primary and secondary school kids in Brunei, and he was also crowned by Indonesia’s Riau University as Islamic Mathematician of the Century. 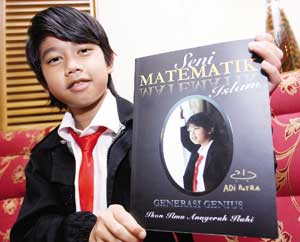 He even posed both WITH and IN the book. Image from pahangdaily.blogspot.my

But now, Adi is tired of the gomen and their empty promises, and he’s saving up his own money to further his studies at Monash University in Australia, because our gomen doesn’t seem to be doing much to help him.

Even though he finished his studies at the International Islamic University (UIA), he was denied a certificate because “he was too young“.

“I was like a guinea pig. That’s what I feel about what happened because I was promised a module for child geniuses.” – Adi Putra Abdul Ghani told The Malaysian Insider

Other than that, Adi seems to be doing just fine.

He frequently gives lectures and talks in local schools and universities and is still making a name for himself. His Instagram is also quite active, you can follow it here. Is this really the fate of being a young genius in Malaysia?

Not all Malaysian geniuses were doomed to a sad fate.

Take Hafizah Noor Isa for example, who was put in the scientific spotlight for being part of a team that published a paper about…er, physics and stuff.

With her success, she has simultaneously proven 2 things:

1) The validity of Einstein’s theory of relativity and

2) Malaysia’s hope hasn’t been consumed by a black hole after all. She transcended Malaysia, now she will transcend the UNIVERSE. Image from ismaweb.net

But it really makes us wonder, why did Hafizah turn out differently from the rest of the kids in this list?

Is it the pressure of becoming famous at such a young age? Is it society that’s expecting too much from them? Or is it the

Is it society that’s expecting too much from them? Or is it the

Or is it the loss of a normal childhood?

Even with our typical Malaysian students, there are also high expectations for them to perform.

Pull any school-going kid from the streets (don’t actually do that), and it’s very likely that they’re attending some form of extra classes in hopes of getting better results. But think about it, each person on our list (except for the late Chiang Ti Ming) is still out there.

Like any other person, their story has not ended, and it’s not too late for them to become what they choose to be.

Maybe instead of projecting our unsolicited expectations on them, we could just give them the support they need to find their own way.

Then maybe we would see less of these tragic stories.

The original article is posted at Cilisos. This article is republished here for educational and informational purposes only.